By Helena Uncategorised No Comments 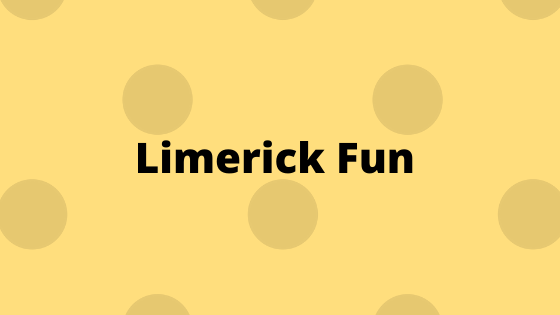 In our final session before the Christmas holidays last night we had great fun writing class limericks. Each line was written by a different student ….

Here are the  best ones:

There was an old man called Tommy

who lived with a weird wooden dummy

one day the cat ate

and got splinters inside his tummy.

There was a sad man named Todd

who in my opinion was odd

and sell cats in a cell

whilst eating chocolate and cod.

Once there was a cat

who wore his tail in a plait

had a love for New York City

until he decide to turn into a hat.

There was a young man from Peru

who liked to chew his shoe

no one was fond of this Peruvian

whose middle name was Julian

and had an odd dog who’d moo.

There was a donnie called Ronnie

in fact he dreaded it

so one day he ate a lorry.

You can find out more about which cookies we are using or switch them off in settings.

This website uses cookies so that we can provide you with the best user experience possible. Cookie information is stored in your browser and performs functions such as recognising you when you return to our website and helping our team to understand which sections of the website you find most interesting and useful.

Strictly Necessary Cookie should be enabled at all times so that we can save your preferences for cookie settings.

If you disable this cookie, we will not be able to save your preferences. This means that every time you visit this website you will need to enable or disable cookies again.